Home > News > Billboard – Dylan, Drugs and Rock ‘N’ Roll: Five Revelations From ‘Once Were Brothers: Robbie Robertson and The Band’

Billboard – Dylan, Drugs and Rock ‘N’ Roll: Five Revelations From ‘Once Were Brothers: Robbie Robertson and The Band’ 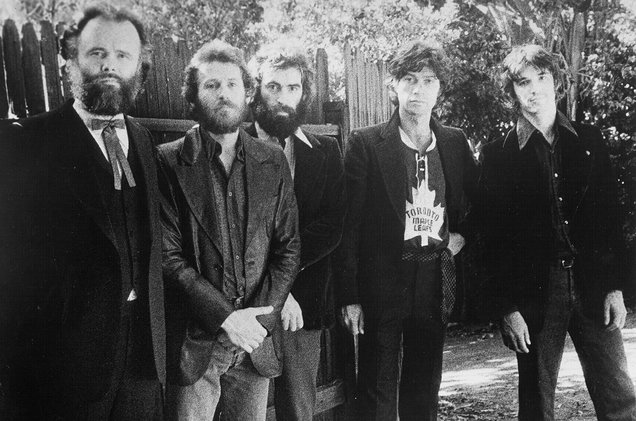 They dubbed themselves The Band as an ironic inside joke, a nod to their status in the music industry as the anonymous guys who spent years backing up Bob Dylan. The name was also “unpretentious, un-juvenile and un-cute,” per singer/guitarist and de facto leader Robbie Robertson.

And yet The Band’s deep legacy is unmistakable. With their smooth blend of rock, folk, bluegrass and R&B, the group defined the Americana roots-rock sound of the late 1960s — never mind that four-fifths of the members were Canadian and only drummer Levon Helm was born in the States.

Their story gets laid bare in the fascinating Once Were Brothers: Robbie Robertson and the Band. Using interviews and rare video footage, the documentary (which was the opening night selection of the Toronto International Film Festival last September) provides an insider’s perspective of The Band’s rise and breakout success with their 1968 album, Music From Big Pink. And unlike most films in the genre, there is no chronicle of a phoenix rising: The original Band would never play again after their seminal 1976 all-star farewell concert that turned into the film The Last Waltz.

And though Bruce Springsteen, Eric Clapton, Van Morrison and Last Waltz director Martin Scorsese all appear on camera to offer praise and anecdotes, the star is the man whose name is singled out in the documentary’s title. (Helm, Rick Danko and Richard Manuel are deceased; keyboardist Garth Hudson, the only other surviving member, is only heard in archival interviews.) The now 76-year-old Robertson tells the history from his no-nonsense perspective, and the Grammy-winning songwriter-guitarist doesn’t hold back in revealing how drugs and other demons led to the musicians’ unraveling. Once Were Brothers, in fact, takes its title from a recent Robertson song and is based on his 2016 memoir, Testimony.

Here were our five biggest takeaways from the new doc.

1. Robertson was a music prodigy

Robertson’s rich ancestry alone — he’s the Toronto-born son of Dolly, an Indigenous mother of Mohawk descent, and a Jewish gangster named Alexander Klegerman who died before he was born —  makes him a unique rock star. English peers Paul McCartney and Mick Jagger jammed with respective school chums John Lennon and Keith Richards after school; he strummed his first guitar while visiting his mom’s relatives on a six-nation Indian reserve in Canada.

By 15, Robertson had written and submitted two polished songs, “Hey Boba Lou” and “Someone Like You,” for his favorite rockabilly band, Ronnie Hawkins & The Hawks. He managed to get a gig with them and toured America. That’s how he met and formed a bond with the band’s drummer, a lanky Arkansas native named Levon Helm. Robertson was already recording in the Mississippi Delta by the time he could legally drive.

2. The first Dylan tour was no crowd pleaser

The members of the Hawks, which included Helm, Hudson, Danko and Manuel, met Dylan in New York City in 1961. The enigmatic folk hero was so impressed that he ultimately hired the gorup[ as his backup band, in hopes that they would help flesh out his new rock sound. Alas, audiences in America and Europe in 1966 did not react well to the “Dylan goes electric” change. They arrived in a new city, they played, they heard a rain of boos, rinse and repeat. “It was a strange way to make a buck,” Robertson recalls.

In a tease of a vintage video clip, filmed in the backseat of a car post-concert, a sunglasses-wearing, cigarette-dangling Dylan complains in a voice dripping with exasperation, “How can they buy tickets so fast?!” (He then asks the mystery videographer to turn off the light and stop filming.)

3. A Martin guitar was instrumental to “The Weight”

The five guys finally forged out on their own while residing and recording inside a ramshackle pink house in West Saugerties, New York. A band, of course, is only as viable as its breakout song — and Robertson takes us to his a-ha moment. “I was noodling on a Martin guitar,” he says, “And I looked inside.” The guitar was manufactured in Nazareth, Pennsylvania. His observation evolved into “The Weight,” which famously begins with Helm’s lament, “I pulled into Nazareth, I was feelin’ ‘bout half-past dead.”

Robertson adds that lyrics of the song culled from his Canada roots as well as his time as a teenager in the Mississippi Delta and seeing America. The song was a signature tune on Music From Big Pink, and an aspiring singer-songwriter named Bruce Springsteen was among the fans who bought the record. “I loved the way their voices blended together,” he says.

4. Robertson was mystified by the Band’s drug use

In many ways, it’s the same old song: A band hits it big, only to lose themselves in drugs and unravel. Robertson, however, was a relative straight arrow who became frustrated at how his Bandmates could binge drink with their friend Eric Clapton and each other, snort cocaine and experiment with heroin. “I was confused that the guys wanted to play with that fire,” he recalls. Robertson’s then-wife Dominique, meanwhile, describes the usage and effects in detail (and it probably can’t be a coincidence that she’s now a recovery specialist.)

With The Band’s output limited, it was up to Robertson to shoulder most of the writing responsibilities, and hold the group together. He quickly grew restless and started planning his career post-Band. Interesting footnote: None of Robertson’s solo accomplishments, including his composing work on Scorsese’s recent opus The Irishman, is mentioned in the film.

5. The Last Waltz wasn’t supposed to be the end

Officially, the Band marked their farewell with a concert extravaganza at San Francisco’s Winterland Ballroom on Thanksgiving night, 1976. As documented in The Last Waltz, friends and peers Joni Mitchell, Van Morrison, Clapton, Neil Young, Muddy Waters and Ronnie Hawkins all joined them on stage, and Once Were Brothers features extensive footage from the show. “It was so free and moving,” Clapton says.

But Robertson reveals that The Band originally intended to take some time to off, and then regroup to record another album. “Everybody just forgot to come back,” he says. He even drifted from his old friend and mentor Helm — but he did visit him in the hospital in 2012, and held his hand just before his death. He also offered a few words: “I told him, ‘I’ll meet you on the other end.’”

Once Were Brothers: Robbie Robertson and The Band opens in select theaters on Friday, February 21