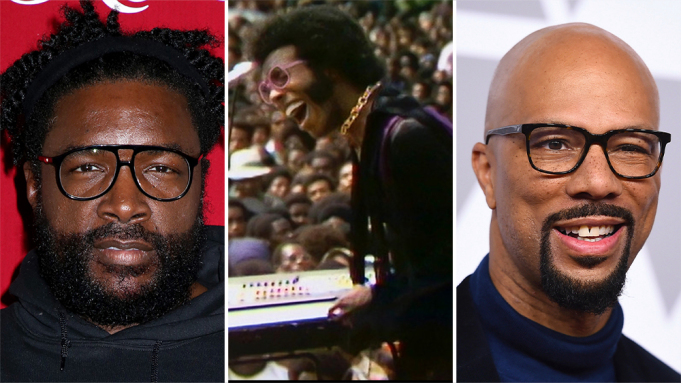 As Sly and the Family Stone’s 1971 tune says, it’s a family affair,

Less than two weeks after his directorial debut Summer of Soul (…Or, When the Revolution Could Not Be Televised) was picked up in a multi-million dollar Sundance Film Festival deal,  Ahmir “Questlove” Thompson is heading back behind the camera for a documentary on Sly Stone – with some long time collaborators on board.

“It goes beyond saying that Sly’s creative legacy is in my DNA….it’s a black musician’s blueprint….to be given the honor to explore his history and legacy is beyond a dream for me,” the Roots drummer and musicologist said in a statement today on MRC Non-Fiction project.

Rock and Roll Hall of Famer Stone formed and fronted the genre and culturally defining Family Stone. This latest film on Stone is expected to focus not just on his successes, but also the consequences and cultural expectations of that rise in an era of expanding media, shifting societal norms in the Sixties, the Black Power movement and the backlash that followed.

The one-time Bay Area DJ and his multi-racial and multi-gender crew spawned a plethora of iconic hits like 1969’s “Stand!” And “I Want to Take You Higher” and the previously mentioned and much covered “Family Affair.” The psychedelic soul band was immortalized on film by a Woodstock performance that was merely one highlight of a distinctly contrarian career.

The still living Stone has been a major influence on almost everyone else in contemporary hip hop, soul, funk and rock’n’roll. From Thompson and now Tonight Show house band The Roots, to The Temptations, George Clinton and Funkadelic, Aerosmith, Prince, Guns’n’Roses and many more, the reach of the Family Stone remains long and deep. An infrequent and often unreliable performer in recent decades, the eccentric Sly has pretty much stayed out of the public eye of late except for a prolonged court battle with his former managers over royalties.

“Sly’s influence on popular music and culture as a whole is immeasurable, and what his career represents is a parable that transcends time and place,” MRC Non-Fiction chief said Amit Dey declared Friday. “Questlove’s vision, sensitivity and reverence brings the urgency that Sly’s story and music deserve, and we’re excited to be working with him to bring Sly’s story to life.”

This new focus on Stone is also a return to form for Questlove coming off Summer of Soul. A stunning performance by the legendary funk and soul artist and his barrier breaking band made up a significant part of the 1969 Harlem Cultural Festival captured in the Disney acquired film.

Along with that appearance by Sly and the Family Stone, Summer of Soul features other heavyweights like Nina Simone, Mahalia Jackson, the Staples Sisters, Stevie Wonder, Glady Knight and the Pips, Max Roach, Abby Lincoln and more. Summer of Soul debuted at Sundance last month and went on to win the Grand Jury Prize for documentary. The film is set for a theatrical release via Searchlight, as well as streaming on Hulu in America and internationally on Star and Star+

As well as directing the as yet untitled feature doc (can we suggest “Thank You (Falettinme Be Mice Elf Agin)”, just sayin), Questlove will serve as executive producer with his Two One Five Entertainment and partners Zarah Zohlman and Shawn Gee. In a reunion with Questlove, Common will also EP the MRC Non-Fiction film via Stardust Films with Derek Dudley and Shelby Stone (no relation) executive producing via ID8 Multimedia. Network Entertainment’s Derik Murray and Brian Gersh will serve as producers too.

Coming up alongside each other in the 1990s, multi-Grammy winner Questlove and Oscar and Emmy winner Common have collaborated on various projects over the years. The Roots’ fourth album Things Fall Apart in 1999 and the UTA-repped rapper born Lonnie Rashid Lynn’s 2000 album Like Water for Chocolate, are but two examples of their musical work together in the past.