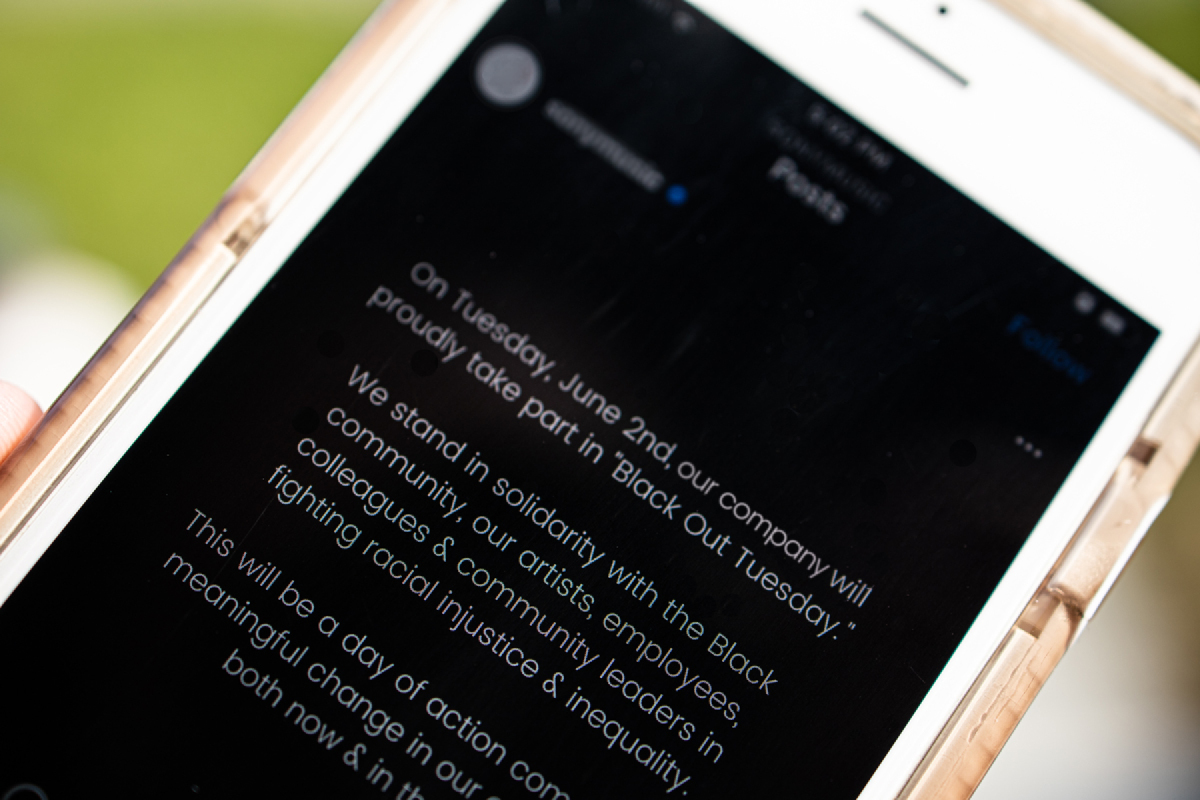 The Music Industry Was Built on Racism. Changing It Will Take More Than Donations

On Tuesday, the major labels protested police brutality with a “blackout.” Executives and artists say industry-wide racial equality is still a long way away

In September 1978, soul producer extraordinaire Kenneth Gamble helped launch the Black Music Association, an advocacy group set on pushing the music industry to “recognize and celebrate the economic and cultural power of black music as well as those who made and promoted it.” “It was time for something new and more inclusive of all black music industry professionals,” Gamble said in 2015. The BMA was addressed to both artists and executives, linking two groups that both faced music industry racism but were often on opposite sides of negotiating tables. The BMA’s slogan? “Black Music Is Green.”

The BMA eventually faded from prominence, “[un]able to withstand splintered agendas in the leadership.” But several executives referenced the organization’s history of advocacy this week in the aftermath of Blackout Tuesday, which saw work stoppages across the major labels. “I feel like we need that [to come back],” says one manager who participated in Blackout Tuesday events.

Amid nationwide protests over the death of George Floyd in Minneapolis, record labels decided to use Tuesday for a rare industry-wide reckoning. Two related conversations have unfolded in parallel. First, can the music industry use its vast resources and wide influence to help reduce police brutality and combat systemic racism? Second, can the music industry finally face down its own history of racism and build a more equitable future?

Some saw the industry’s navel-gazing as a distraction from the fierce urgency of the protests around Floyd’s death. “If I don’t want to be exploited by the music business, I know how to not be exploited by the music business — I don’t sign a contract,” says another manager who participated in Blackout Tuesday events. “I still don’t know how not to be killed by a police officer.”

But this week’s conversation about the ways “the record industry does a very good job of keeping black people out of the room,” as one A&R puts it, is accelerating discussions that have been in progress for decades and were already becoming more public in recent years.

These concern the wildly uneven contracts that continue to earn the music business millions of dollars while passing on only a small amount of that wealth to artists, the myriad techniques a music industry run predominantly by rich white executives uses to profit off black art, bringing transparency to a label system that thrives on opacity, and the capacity for collective action in a ruthless, at times vindictive music business (almost everyone who spoke for this story did so anonymously so as to avoid being penalized) that promotes relentless inter- and intra-label competition over any kind of solidarity.

“None of the [major labels] would even be standing if the business were fair.”

“We’re not looking for these corporations to change everything in a day,” says the first manager. “We’re looking for them to say, ‘We’re wrong, we don’t make money without the black community, here’s a fund we set aside to utilize as you see fit.”

But to truly grapple with these questions is also to challenge the very core of the major-label music business, which was built through relentless and frequently racist and sexist exploitation. “Labels are just in the business of making money,” says the rapper Royce da 5’9,” who has worked with the majors but now operates independently. A second A&R goes further: “None of the [major labels] would even be standing if the business were fair.”

A typical record deal, for example, involves an artist giving up the rights to his or her music, often in perpetuity, in exchange for an up-front check and, eventually, maybe, the right to pocket 18 cents out of every dollar made from those recordings — after the label recovers the advance, the marketing budget, tour support, and other expenses.

“The music business has one of the most predatory loans in the history of loans,” says the second manager. “Even with a bank, your interest rate may be high, but if you pay your loan off, you at least own your house. [In the music industry], you give someone something for eternity and you never get it back.”

The contemporary popular music industry also has racism baked into its foundation. The term R&B was coined, after all, to replace “race music.” The charts have always been mostly segregated, with white musicians responsible for the majority of rock, country, and pop, and black musicians making their way in R&B and hip-hop. Black acts are still penalized for trying to move into white spaces — just last year, Lil Nas X was booted off Billboard‘s country chart — while white performers who dabble in hip-hop (Post Malone, G-Eazy) and R&B (Adele) benefit from a significant commercial windfall.

“They need to have more initiatives to hire black people across the board.”

The makeup of the music industry largely mirrors the makeup of those charts today. Black executives remain concentrated in what are called “urban” departments, which focus on hip-hop and R&B, while white executives are free to move as they please. This is true even as hip-hop and R&B have come to dominate listening in the streaming era.

“Pop music is black music; that’s just what it is,” says the first A&R, who works predominantly with rappers and R&B singers. “We need the offices to reflect the charts. It’s real simple.”

Achieving that “simple” goal will be a challenge for a music industry with little recent history of effective collective action. The original BMA managed to cut across the industry’s various factions, making room for artists, executives, distributors, and broadcasters, but factionalism eventually contributed to the organization’s dissolution. “In the music business, the people who know things don’t pass that on — everyone is in competition with each other,” Royce da 5’9″ says.

While there are music unions built for collective action, none are geared towards addressing inherent racial inequities in the business. And most record label executives cannot join unions because they are managers.

“It would be beautiful to get our masters. That’s the reparations we need as black artists.”

The people with the most power to influence change at the labels are likely the artists themselves, so their involvement in any effort is crucial. In the past, acts with leverage have not always been willing to use it to dismantle a system that’s offering them a check. “When a black artist who’s in high demand walks into a record label, and he sees the entire conference room is white, why doesn’t he say something then?” the A&R asks. “Say, ‘This is weird. I don’t make music for people who look like y’all.’ They’re never gonna do that. Sign a check, take a picture with whoever, keep it moving.”

But one black artist signed to a major label says artists face the exact same racist constraints as executives. “Anyone who works in the industry as an executive or A&R and is black knows how fucked up it is, but doesn’t want to jeopardize their job or their reputation to fight super hard for a black artist because they know that their job is on the line as well,” he explains. “They can only do so much, because [the major labels are] still run by the same white people.”

To shift the balance of power in the corner offices, executives and managers already have several proposals in mind. “They need to have more initiatives to hire black people across the board,” says Kayode Wellington, a manager who previously worked at Epic Records and Pulse Music Group.

Just as important, “there must be some type of career development system for anyone who comes into the organization,” says Craig Baylis, a major-label veteran (Sony Music, Warner Music Group), talent manager, and brand strategist. “Without a career track, how are they going to identify and undo systemic racism and exalt black folks?”

“Make the payment of black executives in line with the rest of their white peers.”

“At a company like Toyota, when you work for a certain amount of time, you know you’re gonna get certain raises, move up to certain positions,” Baylis continues. “At a record company, you can come in as an assistant, amass 10,000 followers on Instagram, throw a party, invite someone in the right position at the company, and end up as a VP.”

The first A&R also calls for more transparency around pay rates. Unless everyone is aware who makes what, it’s hard to “make the payment of black executives in line with the rest of their white peers,” he says.

Maybe most important of all, a system needs to be put in place to ensure that the labels take action to decrease racial inequality. Labels rarely, if ever, police themselves, often taking action to oust executives accused of sexual assault or reduce payola practices only when they are forced to do so by outside entities. With that in mind, Baylis proposes the creation of an independent body in charge of monitoring labels’ efforts to become more diverse. “That governing body should not be in the pockets of the record labels, and not be in the business of promoting artists,” he says.

If implemented correctly, all these steps would at least help increase the number of black executives in positions of power. But is that enough? It doesn’t necessarily change the underlying business model of the major label music industry, which remains focused on offering those “predatory loans” to young artists and then sorting them into racially defined genres.

“It would be beautiful to get our masters,” the major-label artist says. “That’s the reparations we need as black artists: The music that we make, we own. Or we get shares of the label when we sign… It shouldn’t be crazy for us to want to own our own masters.”

Royce da 5’9″ calls this week “just a start.” “We can’t just launch initiatives in the wake of chaos and then stop,” he continues. “We have to keep it going.”