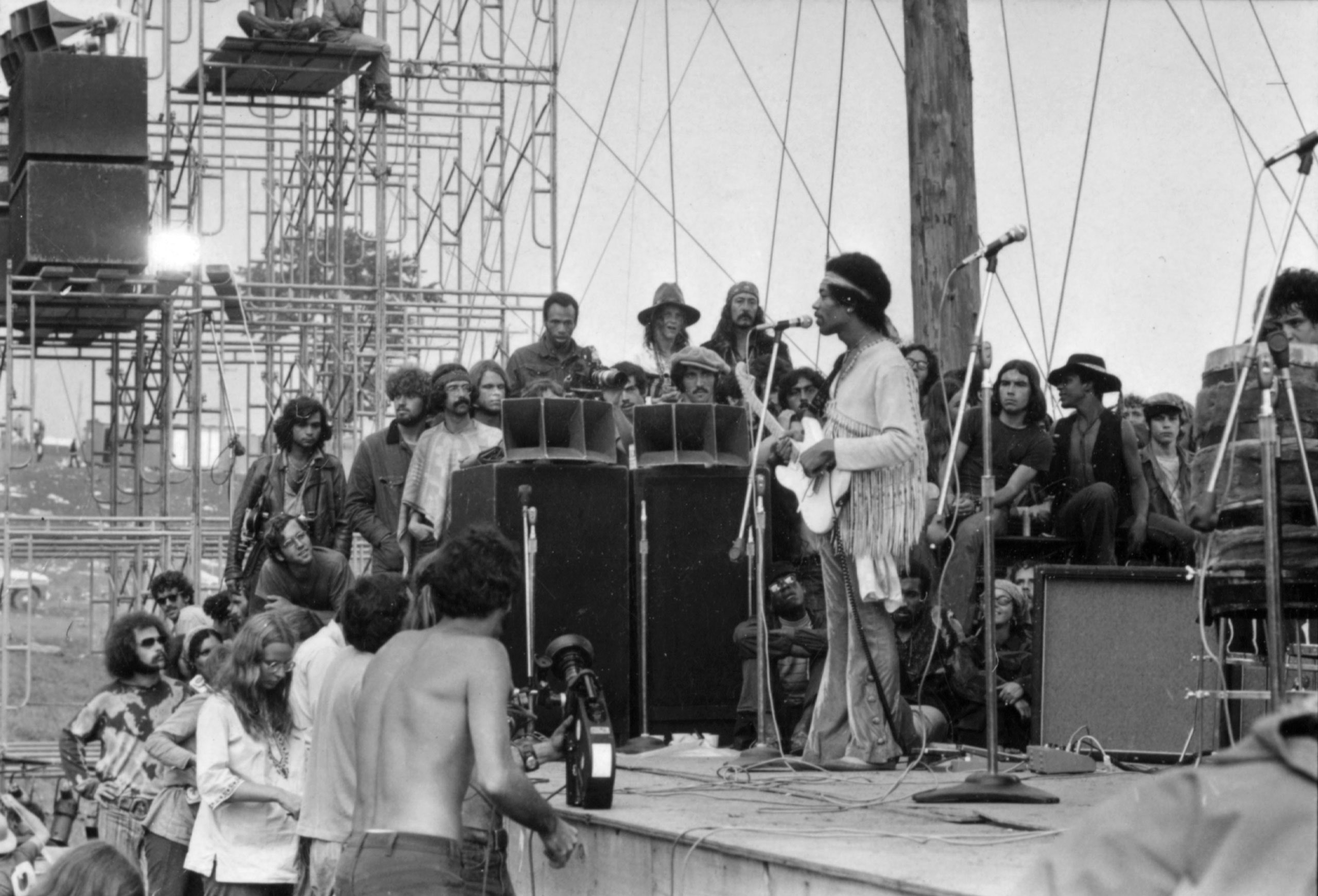 Jimi Hendrix’s Woodstock anthem was both a protest of the violence of a wholly unnecessary war and an affirmation of aspects of the American experiment worth fighting for. Photograph by Larry C. Morris / NYT / Redux

The summer before seventh grade, I started wearing my dad’s Stetson hat and paisley bathrobe, which I believed approximated the bell-sleeved garment that Jimi Hendrix wore in the poster on my bedroom wall—a strange rendering in iridescent pastels, with Jimi looking like a dandified cowboy, playing a righty guitar lefty so that it was, fascinatingly, upside down. I wore the outfit for a class presentation that fall, brought in my own electric guitar and amp, and did the opening ten or twelve bars of “Purple Haze.” The amp was way too loud for the room, the window casings rattled, my classmates looked frightened. But I had put work into learning the song and was determined to share the entire solo. A vinyl copy of “Are You Experienced?,” found at the public library the year before, had led to hours spent hunched over a turntable, slowing down the r.p.m.s to make it easier to parse the solos on “Hey Joe,” “Third Stone from the Sun,” and “The Wind Cries Mary.” By going full Talmud on Hendrix, I’d taught myself to play the guitar, and had become an indefatigable Hendrix proselytizer. Kids had spray-painted “Clapton Is God” on the walls of the London Tube station, I explained to anyone who would listen, but the real God was Jimi.

I knew that he had performed at Woodstock, that mythic experiment in living free from status-quo strictures held on a farm somewhere in New York (I tried to imagine the farms in the Wisconsin village where I lived holding such an event), and soon I was able to acquire a VHS cassette of Michael Wadleigh’s epic documentary of the festival. After all the footage of scaffold assembly, the interviews with stoned pilgrims, the endless P.A. announcements (watch out for that brown acid), the rain and mud, and the often great music, there came, near the end, footage of Jimi playing “Voodoo Child (Slight Return),” a tune I knew well, which then segued into “The Star-Spangled Banner.” There are lots of examples of song renditions whose power and uniqueness make them definitive versions: Miles Davis doing Thelonious Monk’s “’Round Midnight”; John Lennon’s ecstatic run through Chuck Berry’s “Rock and Roll Music,” from “Beatles for Sale”; Judy Collins’s harpsichord-drenched take on Joni Mitchell’s “Both Sides Now”; Willie Nelson’s near Sprechstimme “Stardust”; John Cale’s demolition of “Heartbreak Hotel”; Devo’s cubist “(I Can’t Get No) Satisfaction.” (Feel free to make your own list.) What Hendrix did with “The Star-Spangled Banner” at Woodstock, in August of 1969, was something else altogether. It was, among other things, an act of protest whose power and convincingness were inseparable from its identity as a fiercely nonconformist act of individual expression.

Hendrix had been a paratrooper in the 101st Airborne (from which he was honorably discharged), and the young men fighting and dying in Vietnam are evoked in the sounds that start eating away at the tune at about the place the words “rockets’ red glare” would be sung. Bombs, airplane engines, explosions, human cries, all seem to swirl around in the feedback and distortion. At one point, Hendrix toggles between two notes a semitone apart while burying the guitar’s tremolo bar, turning his Fender Strat into a doppler warp of passing sirens, or perhaps the revolving blades of a helicopter propeller. A snippet of “Taps” toward the end makes explicit the eulogy for those left on the battlefield, transcending Vietnam and becoming a remembrance of all those lost to the violence of war.

The solo might also be registering a different war, one that had been going on at home. The previous year, Martin Luther King, Jr., had been fatally shot at the Lorraine Motel, in Memphis, and the blow delivered to the civil-rights movement—centrally inspired by King’s dream of a time “when people will not be judged by the color of their skin but by the content of their character”—seems somehow part of the rage flying out of Hendrix’s amplifiers. All the exalted ideals of the American experiment, and the bitterness of its contradictions and hypocrisies, are placed in volatile admixture through an utterly American contraption, a device you might say is the result of a collaboration between Benjamin Franklin, Leo Fender , and Sister Rosetta Tharpe, the mongrel machine that Hendrix made into a medium for a new kind of virtuosity. In the Woodstock performance of the national anthem, we find that an electric guitar can be made to convey the feeling that the country’s history could be melted down, remolded, and given a new shape.

“The Star-Spangled Banner” was at its inception already a mashup, already a rendition. A setting of the lawyer Francis Scott Key’s 1814 poem, “Defence of Fort M’Henry,” to a melody from a British gentlemen’s club sing-along, the anthem memorialized the battered flag (then with only fifteen stars) that flew over Fort McHenry during its bombardment by the British. Yet the freedom that the song celebrates tends to stop when it comes to unorthodox arrangements. Igor Stravinsky, freshly arrived in the United States in 1939, did his own orchestration, adding a quirky dominant seventh chord over the word “land”—and was asked by the Boston police to desist. (He politely removed the arrangement from subsequent performances.) The contralto Marian Anderson sang the anthem with regal classicism at Eisenhower’s second Inauguration, in 1957, the first Black woman to sing for such an occasion; her performance was doubly notable, as she had sung “My Country ’Tis of Thee” eighteen years earlier at the Lincoln Memorial, because the Daughters of the American Revolution would not let her perform at the D.A.R.-owned Constitution Hall. More recently, the tune has served as a provocation to adopt a position: to raise a fist or take a knee (or to protest those very actions). But songs do not reduce to statements of ideology. They are fluid, elastic atmospheres that allow for multiple inflections, hospitable to those contradictions that Walt Whitman celebrated when he said, in his own “Song of Myself,” that he contained multitudes. During a Dick Cavett appearance, in 1969, Hendrix was asked about his own “unorthodox” take on the anthem. “All I did was play it,” he said, sounding cool and abstracted, “I’m American, so I played it . . . it’s not unorthodox. I thought it was beautiful.”

Jimi’s Woodstock anthem was both an expression of protest at the obscene violence of a wholly unnecessary war and an affirmation of aspects of the American experiment entirely worth fighting for. In “If 6 Was 9,” from his second album, “Axis: Bold As Love,” Hendrix sings that he has his “own world to live through and I ain’t gonna copy you,” finally deciding to “wave my freak flag high,” at which point he unleashes a spastic, flickering, birdlike spray of notes from a guitar soaked in reverb. His rendition of “The Star-Spangled Banner” turned it into a blazing freak flag, a protective shield for eccentrics, oddballs, weirdos, outsiders, marginal people of every sort. “Precisely because the tyranny of opinion is such as to make eccentricity a reproach,” John Stuart Mill wrote, in “On Liberty,” “it is desirable . . . that people should be eccentric. Eccentricity has always abounded when and where strength of character has abounded.” Mill’s use of “character” here should be heard with the emphasis that Dr. King placed upon it, and his warning about tyrannical conformism should be heard as of a piece with Hendrix’s vow that he is not going to copy you.

My son is now about the age I was when I wore the Stetson and the bathrobe and frightened my classmates with the window-rattling version of “Purple Haze.” I made him sit down with me the other day to watch the footage of Hendrix playing the anthem. After some questions about the people in the audience (were they homeless?), he asked, with what struck me as real wonder, how someone could make all those sounds using just a single guitar. I began to explain how feedback worked, what tube amplification and overdrive were, but I was droning on over the footage; I caught myself and stopped, and we both sat and watched in silence. When it ended, he offered the taut verdict that the whole thing was “cool,” to which I agreed, and he went off to do something else. It was only then that I had a better answer to the question about how all those sounds could be made to come from a single guitar: because the guitarist was Jimi Hendrix.